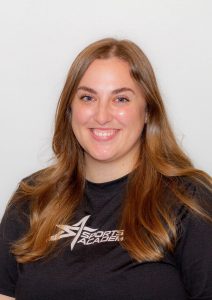 Dr. Megan or “Dr. Meegs”, a Chiropractic practitioner in the ISM Department is a transplant to California, being originally from Eagle River, Alaska. While in Alaska, Dr. Megan was involved in many sports including Competitive Cheerleading, Flag Football and Soccer. Since being involved in a multitude of sports, Dr. Megan was able to evolve her love of the athletic environment and competition into her ongoing education and experiences. During the summers in Alaska, she would aide on the sidelines as medical assistance to the Alaskan Collegiate Summer Baseball Leagues traveling to varying communities. Once leaving her hometown, Dr. Megan went on to receive her Bachelor of Science in Exercise Science from Utah Valley University. In her undergraduate degree, Dr. Megan worked extensively along side their athletic department assisting in athletic injuries and competitions, which ultimately landed her with a coveted Sports Medicine Internship with the US Olympic Committee. During her time in Utah, she was able to work in Operating and Emergency Rooms as well as Physical Therapy offices to further understand the dynamic of healthcare. Upon recognizing the value of conservative and holistic medicine that can be beneficial to any population, Dr. Megan went on to receive her Doctorate in Chiropractic with an emphasis in Sports Medicine from Southern California University of Health Sciences. Then in 2021, she was nominated for the President’s Award demonstrating outstanding work in her profession, school involvement and community service. During her Chiropractic schooling, she has completed courses in FAKTR (Functional and Kinetic Treatment with Rehab), Rock Tape, Webster Certification (pregnancy care), energy healing and various technique building seminars. Her enthusiasm for sports, wellness and the health maintenance mindset has extended far into the community where Dr. Megan has aided in a host of events. Those outreach community events have included AVP Volleyball, Men’s SurfSki, local CrossFit tournaments, and Women’s BMX.

In addition, Dr. Megan loves the outdoors being an enthusiast of backpacking, camping and hiking. Hoping to one day accomplish the Pacific Coast Trail. Dr. Megan has also always had a strong devotion to board games, with Settlers of Catan bring among her favorites, sampling weekly new flavors of Crumbl Cookies and listening to True Crime podcasts.