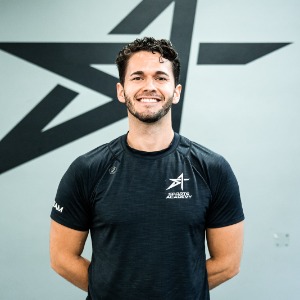 James is one of our Performance Coaches here at Sports Academy. He works closely to integrate a multi-dimensional approach with clients of all athletic backgrounds and goals.

James graduated from Queens College in 2014 with a Bachelors in Sociology and Media Studies. His pursuit for knowledge led him to further graduate from California University of Pennsylvania in 2016 with a Masters in Wellness & Fitness. Recently as of 2021, James has completed his second Masters degree in Exercise Science from Edith Cowan University with a concentration of Strength & Conditioning. He is also a LV II Strength Coach through the Australian Strength & Conditioning Association that requires submissions of research, graduate-level education, and practical application for accreditation. James’ certifications include NASM CES and PES.

James was born and raised in New York City where he grew up playing tennis. During those competitive years, he also was involved in other individual sports like boxing and kendo, where he achieved the rank of first kyu. Right before entering college, James became a registered United States Professional Tennis Association Coach and rose to the rank of Professional Coach within the organization. His love for the game and improving player performance on the court allowed him to work with various levels of talent along the northeast region. Previous to Sports Academy, James had worked as a personal trainer in NYC for multiple years before moving coast to coast. James enjoys a nice balance of outdoor recreational activities, traveling, and binge-watching movies and TV shows.”