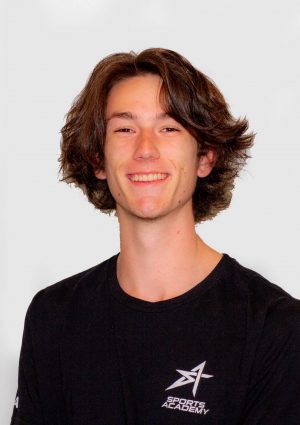 Aidan is a part of our coaching staff for our Youth Volleyball Membership, Middle School Girls Sand Volleyball Membership and Boys Club Volleyball teams.  He enjoys working with his athletes on a variety of skills not only for volleyball, but also on life skills and what it means to be a part of a team as well as a leader.  Aidan focuses a lot of his coaching on the fundamentals and basic decision making.  Volleyball is a mental sport and Aidan works with his athletes on being mentally tough before, during, and after a game.

Aidan graduated from Westlake High School where he started on their indoor volleyball varsity team for two years as an outside hitter and middle blocker.  During his senior year his team won League and he was awarded the Captain’s Award.  Aidan also played beach volleyball for Westlake, during his time there he was awarded two medals while playing on their top beach team. He is currently playing for Moorpark College’s Indoor Volleyball team as an opposite and utility player and their Travel Beach team where he recently placed third in a collegiate beach tournament.

Aidan is originally from Ventura where he first found volleyball on the beach.  He now lives in Thousand Oaks and attends Moorpark College as a full-time student athlete.  Aidan loves playing volleyball, spikeball and enjoys going to the beach.